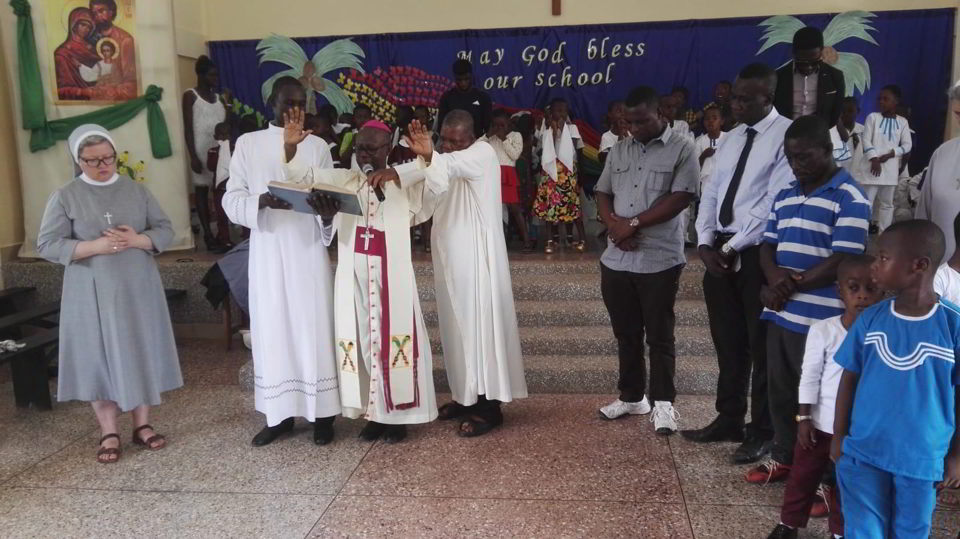 Mother Jana, Sisters Helen and Daniela were among the special guests at the blessing of Stage 2 of Holy Family School Yamfo.  In his address Most Reverend Peter Atuahene, Bishop of Goaso Diocese thanked M. Jana and the Sisters for the sacrifices made for the sake of this mission. Mr. Alfred Dapilah, the Supervisor of Private Schools in the Tanoso District, congratulated the school for its achievements and its standing as a model A Grade School in the region.

The performances of the children were enjoyed by all. The musical and dance numbers presented captured the unique culture of Ghana as well as the Christian spirit of the school. Mother Jana recalled the beginnings of the school and its growth, not only of the buildings but more especially the growth and development of the students. Sr. Angelina and her staff are to be commended for their hard work and commitment to the school. 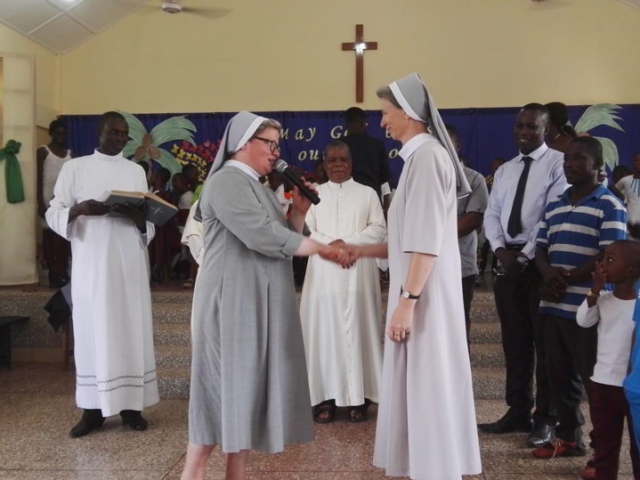 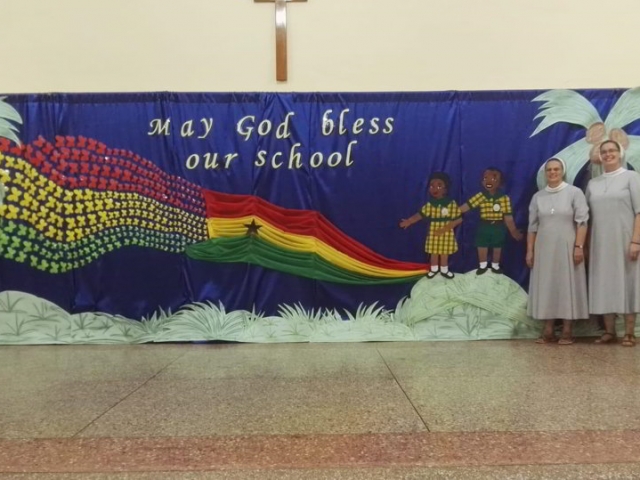 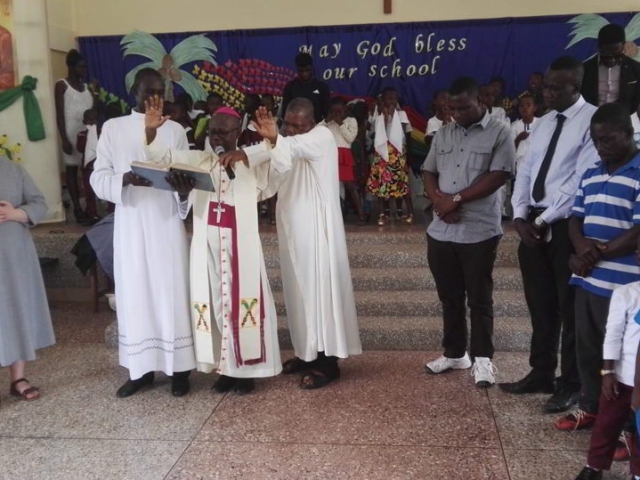 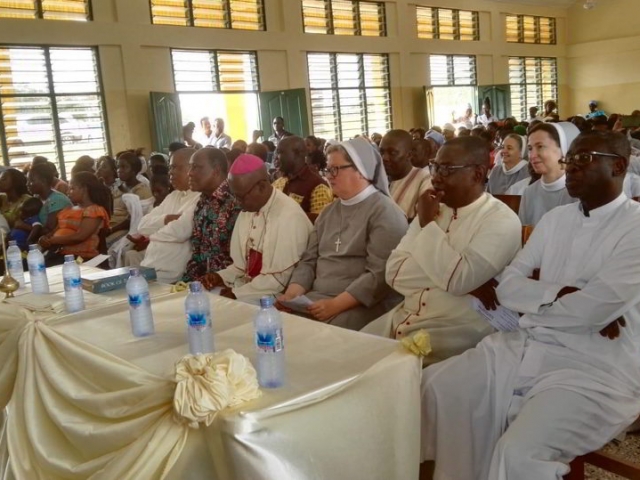 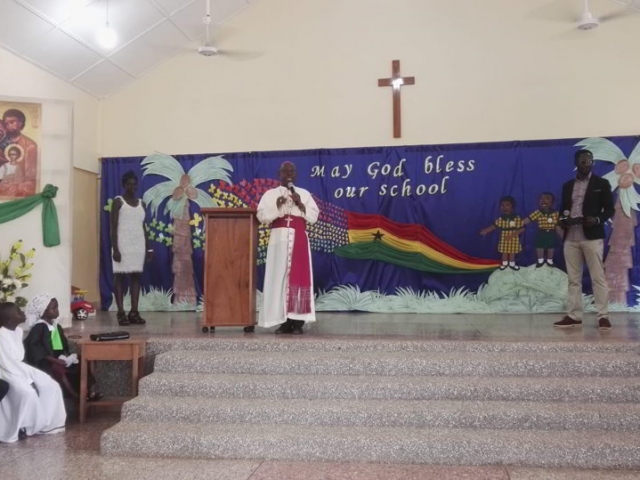 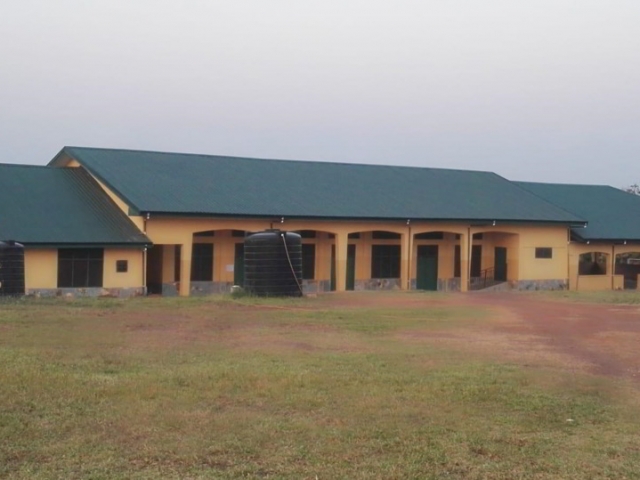 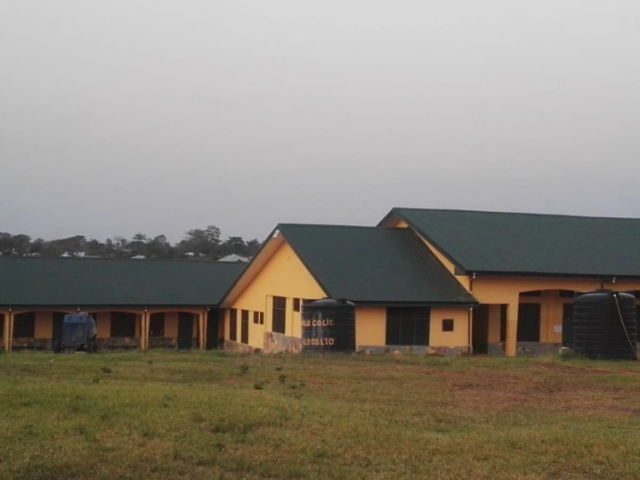 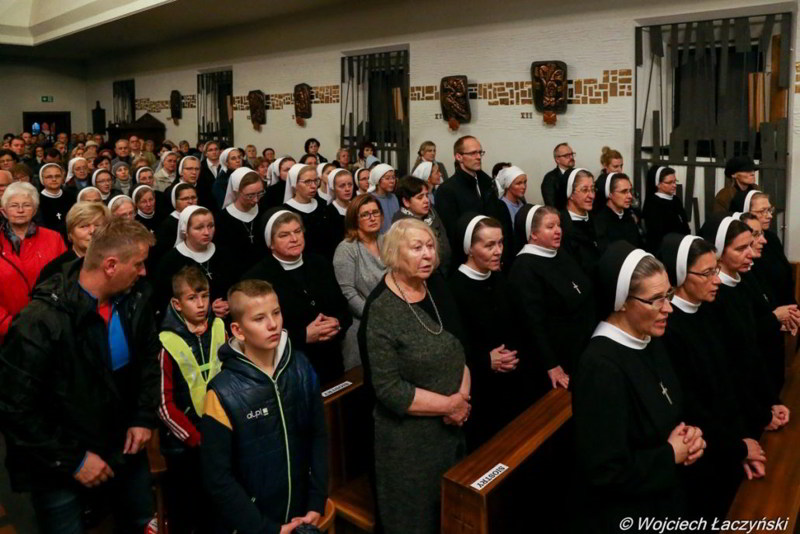 On Sunday, November 4, 2018, in the parish of St. King Stephen, Sisters from the Holy Name of Jesus Province began the celebration of the 100th anniversary of their ministry in Warsaw. Card. Kazimierz Nycz, Metropolitan of the Archdiocese of Warsaw celebrated the Mass and gave the homily. Many people took part in the celebrations: priests – former vicars of the local parish, diocesan and religious priests with whom the Sisters cooperate and who minister to them, Sisters from various congregations, parish council members, benefactors, school and convent employees, members of the Association of the Holy Family and the Nazareth Youth Ministry. Representatives of the city authorities were also present, including the mayor of the Mokotów district – Bogdan Olesiński.

On this special day, Sisters from various Provinces and from the Nazareth communities within Poland and from abroad came to Warsaw. Among them was Sr. Halina Dołęga, General Councilor from Rome, representing Mother Jana Zawieja, General Superior. Sr. Teofania Migowska, Provincial Superior, in her words of welcome, invited everyone to pray together and give thanks to God for all the favors that were received by each of the Sisters from the moment she arrived in the capital in 1918 to the present day.

The House in Warsaw was founded by Mother General Lauretta Tekla Lubowidzka at the expressed desire of Pope Benedict XV. This occurred through the mediation of Fr. Henryk Przeździecki, who was in Rome during World War I and in 1916 became the delegate of the Polish Episcopate to the Holy See. Nazareth Sisters arrived in Warsaw before the end of World War I. The press publicized this event. The Warsaw daily “Polak-Katolik” (Polish-Catholic) (No. 191) published a short article entitled “Nazareth Sisters in Warsaw”, in which they announced that on September 19, 1918, the Sisters had arrived in the capital and intended to open a hostel for students, followed by a middle school for girls and a dormitory at 16 Wilcza Street. On November 5, 1918, Archbishop Aleksander Kakowski issued an erection document of the House of the Sisters in Warsaw at 16 Wilcza Street in which we read: I erect the religious house of the Congregation of the Holy Family of Nazareth on November 5, 1918. This is the official date of the beginning of the community.

In the fall of 1919, the Sisters moved to the building at 14 Litewska Street. After a short time, when the number of students increased and there were no additional rooms, the Congregation decided to purchase land on the outskirts of Warsaw at Czerniakowska Street and to build the Educational Institute of the Congregation of the Sisters of the Holy Family of Nazareth. The construction of the building was undertaken by the Architectural Company of Karol Jankowski and Franciszek Lilpop. The original ornamentation and material – all these were innovations for the project. On August 30, 1924, when the foundations had risen above the ground, the ceremony of consecrating the cornerstone of the building took place. The blessing was done by Card. Aleksander Kakowski, assisted by several bishops, priests, parents of our students and residents of Czerniaków.

The building was to include a large chapel, the Sisters’ private area and a boarding school. The project did not go quickly due to financial difficulties. In 1926 construction was stopped. The building already had a roof, but only one wing was finished, to which on July 7, 1926 students and Sisters moved from 14 Litewska St. In order to obtain more funds, the Sisters went to the United States. Thanks to the help of the faithful and the great sacrifices of the Sisters, both in Poland and in the United States, in January 1929, the chapel was dedicated under the patronage of Saint Joseph, the Spouse, by Bishop Antoni Szlagowski. The entire facility was ready for use in October 1936. The school had the same rights as state schools and enjoyed the recognition of the authorities and society.

Already in the first days of the Nazi occupation in 1939, the city authorities occupied the school building and allocated it to the Central Welfare Council Center, in which 700 people lived until the outbreak of the uprising. In some rooms of the dormitory, the Sisters opened a school – a middle school and a humanities high school, which was closed by the occupying government on November 15, 1939. From that day on, only a general and vocational school could exist. Under the signage of the general and tailors vocational school, the Sisters were secretly teaching middle and high school classes. Five conspiratorial “matura” (final exams for graduation) took place in this building, and all together 115 students passed their matura exams. There were 130 female students in the primary school, middle school and high school, including nine girls of Jewish descent. There were also secret lectures in classical philology at the University of Warsaw.

In February 1944, the German authorities occupied a large part of the building and dedicated it to a Hungarian military hospital. In June, the last transports of wounded Hungarians left our Nazareth building. The building also housed the Ujazdowski Hospital, which was removed by the Germans a few days after the outbreak of the Warsaw Uprising. During the uprising, insurgent units stayed in the building and fights with the Germans were fought. In the gym, there was an insurgent hospital, and the insurgents were brought in through the church entrance. Children came to the school through tunnels, to breathe in the well-known walls for a moment. Fr. Walery Płoskiewicz heard the confession of and prepared for death those who had no chance of survival.

Before the Warsaw Uprising, there were 50 Sisters in the community, 25 sisters left the house before its fall and this group went to Okęcie. The second group of the Sisters, together with the Local Superior, Sister Eutalia Jadwiga Wismont, left the house after the failure of the uprising and headed towards Pęchiery, the third group stayed in villas near Karczew, along with the Novices and Novitiate Director, Sr. Ezekiel Szupenko, as well as the students. Already on January 20, 1945, two Sisters, Sr. Amabilis Filipowicz and Sr. Izabela Machowska, walked on foot from Śródborów to see if the house at Czerniakowska was still standing. Despite the huge damage, including several holes from artillery shells and a broken part of the roof, the building still towered over the destroyed Czerniaków.

After the war, the house and school found themselves in the difficult communist reality. The building became the state-run public school no. 62, and then a mechanical technical school. The third floor was left for the use of the Congregation; the Ministry of Health and Social Welfare took, by way of a lease, the 1st and 2nd floor for the Health Center. In this situation, the Sisters’ Private High School and the dormitory functioned in a very reduced space. In order to expand the space, the attic on the fifth floor and in the so-called “Ark” was used. Right after the war, the Sisters opened a Caritas nursery and preschool at the request of the Episcopate. The nursery survived only one and a half years and the kindergarten until 1962. In addition, immediately after the war, from April 1945, the Sisters, on behalf of the District Welfare and Social Committee, led the district soup kitchen for the residents of Warsaw, distributing soup and bread for 1000 people a day. From 1946 to 1947, the Sisters ran a second kitchen for 600 undernourished neighborhood residents, mainly children. The chapel, whose original use was limited to the Sisters and the school and which had been devastated during the war, as a result of the lack of a church in the area became a public chapel, and later became the parish church. In 1963, the church became the rectorate with an independent priest. On March 1, 1973, by virtue of the decree of Archbishop Cardinal Stefan Wyszyński, the Primate of Poland, it was recognized as the parish of Saint King Stephen.

In addition to the apostolates held up to this point, the Sisters were engaged in pastoral ministry in the parish. Major changes in the house took place after 1989. These were changes in both the premises – the successive giving back of the entire facility to the Sisters before summer of 1991, as well as personnel changes. At that time, not only the space, the number of students and the number of Sisters working in the school, but also the need increased. The fundamental change that took place in the structure of the Holy Name of Jesus Provincialate concerned the separation of a new, second community under the patronage of Jesus, the Master of Nazareth, with a consistent rhythm of work, combining the Sisters’ school duties with their religious life and prayer.

Since 1996, the magnificent gray brick building at 137 Czerniakowska Street has been hosting two Nazareth communities. As Nazareth Sisters, following the example of their predecessors, the Sisters try to meet the needs of families. They have been running the school and dormitory since 1919, they are engaged in various services for the parish and the local area, and above all they pray for families every day, entrusting them to the Holy Family – Jesus, Mary and Joseph. During the Jubilee Year from November 4, 2018 to November 4, 2019, a plenary indulgence can be received by visiting this parish church and fulfilling the usual conditions – sacramental confession, Holy Communion and prayer in the intention of the Holy Father. Feel invited: Sisters of the Holy Family of Nazareth, 137 Czerniakowska Street, Warsaw. 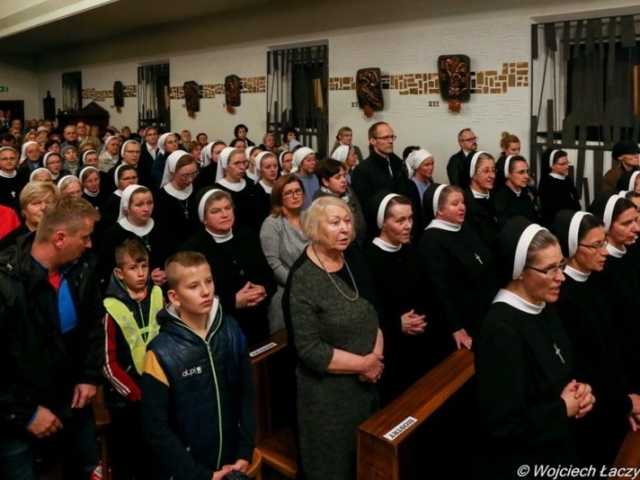 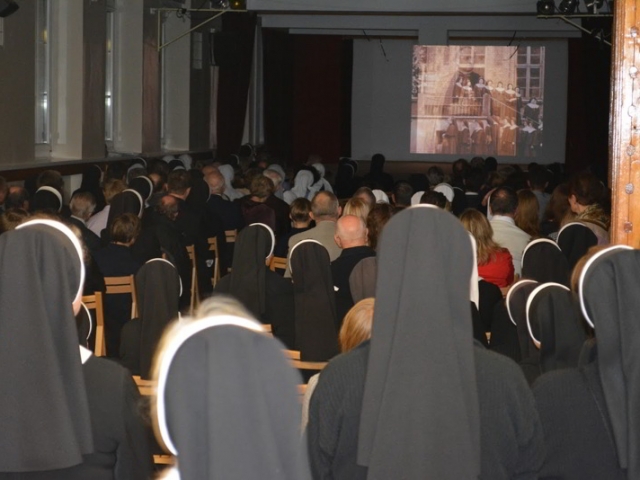 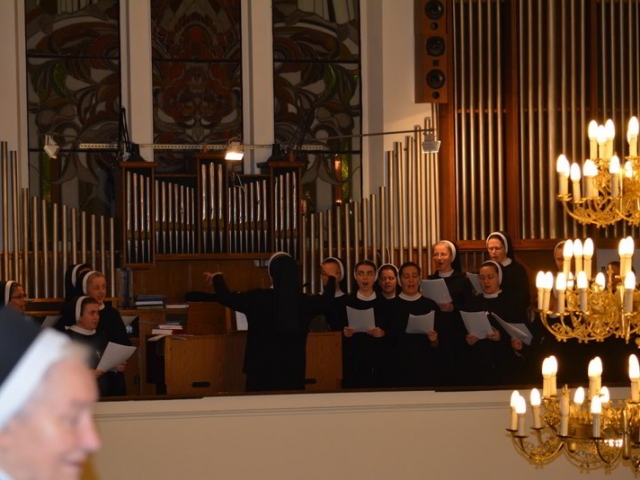 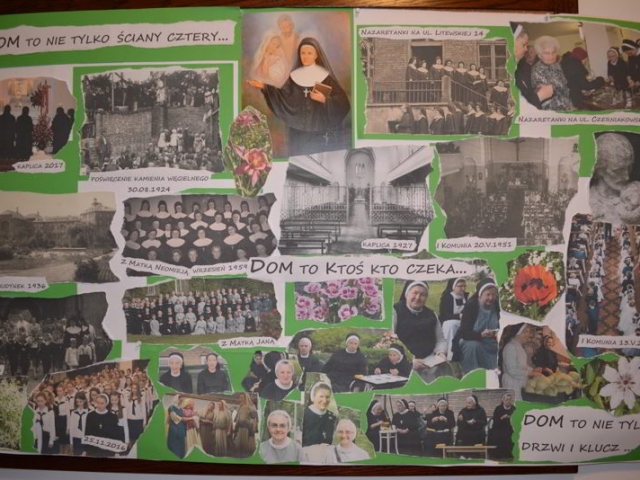 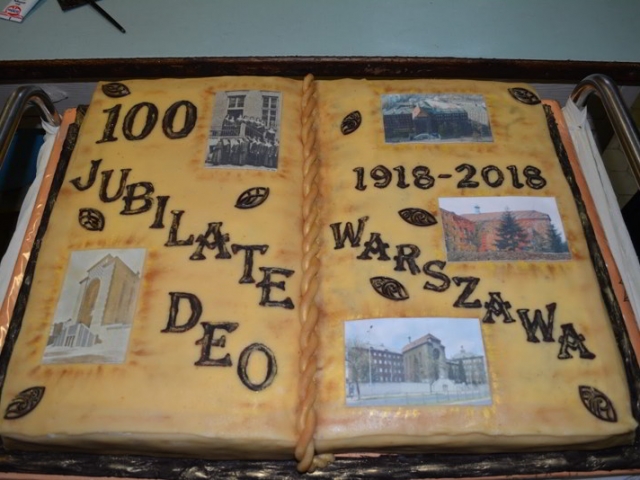 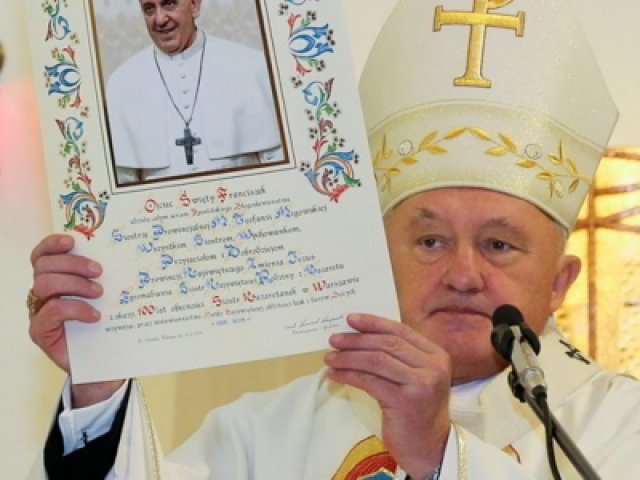 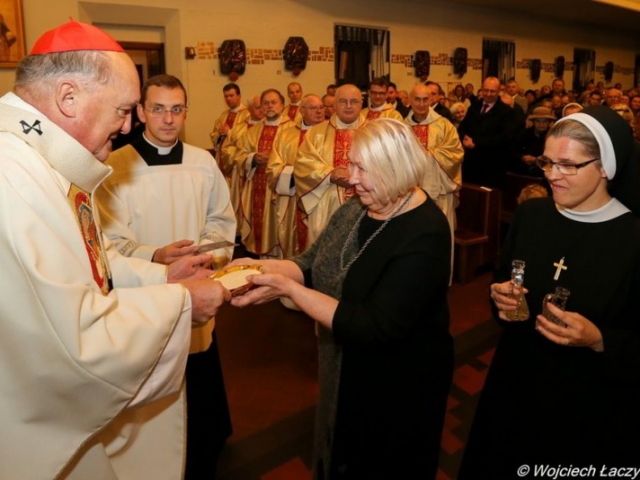 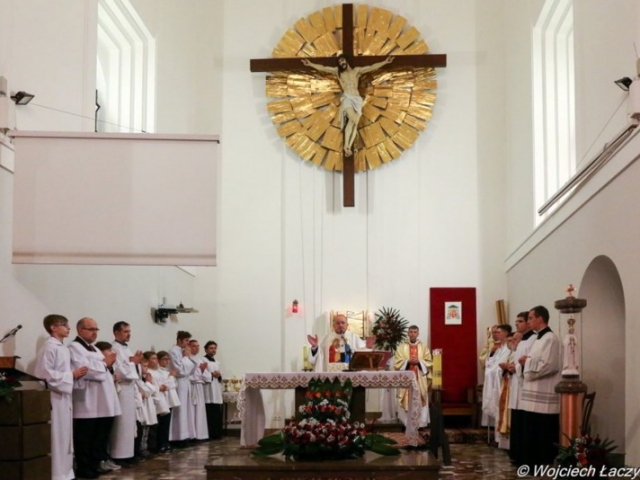